After getting a delightful bunch of teacher-sanctioned fan mail from the students of Lincoln Heights Elementary School in Spokane, I Googled the area for distinctive landmarks and found this cool Radio Flyer slide in a nearby park that I was sure the kids would be familiar with.

I sent the school a picture of Larry at the park (above) and received even more thank you letters in return.

But now, seeing that they could affect Larry’s fate, the kids deluged me with helpful suggestions for future installments in the series. Of course many suggested Spokane as a destination… 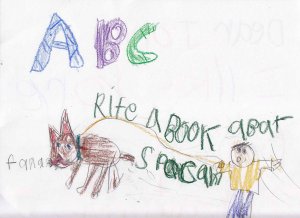 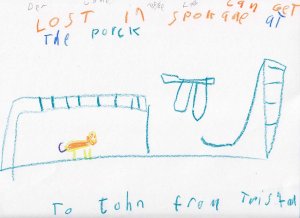 But there were plenty of other suggestions.

There were so many –far too many to scan– but I have to say this one was my favorite. A kind of Donner Party Larry book:

This entry was posted in Larry Gets Lost, Seattle ABC, Spokane. Bookmark the permalink.